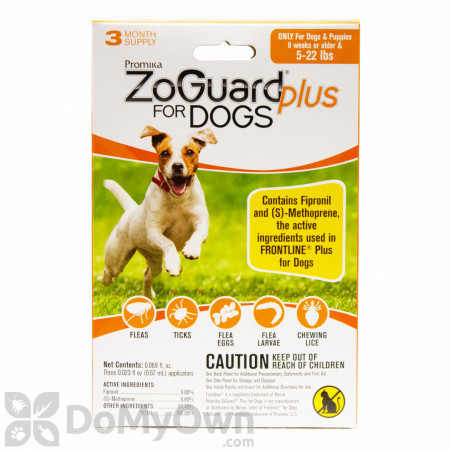 ZoGuard Plus for Dogs is the perfect solution to help protect your dogs against fleas and ticks. It uses Fipronil and S-Methoprene (insect growth regulator) as its active ingredients (same as leading competitor, FRONTLINE Plus) which effectively kills fleas, ticks (including those that may transmit Lyme disease) and chewing lice. ZoGuard features a sustained release formula which was developed to offer quick and long-lasting control, but with better value for the money. Product comes with three applicators and will provide a 3 month supply. Save money and purchase ZoGuard Plus!

Choose from the following:

1. Remove product tubes from the package.

2. Separate one tube from the others. Hold the tube with notched end pointing up and away from the face and body. Use scissors to cut off the narrow end at the notches along the line.

Q. Does ZoGuard Plus expire?

No, as long as you store ZoGuard Plus at room temperature and sealed in its original packaging it will not expire.

Q. Can I use it if my pet is on medication?

Q. How old should my dog or cat be before I use ZoGuard Plus?

ZoGuard Plus can be used on puppies and kittens 8 weeks or older.

Q. Does my dog or cat have to already be bitten by a flea or tick for ZoGuard Plus to work?

No. ZoGuard Plus kills fleas and ticks through contact with your pet’s coat.

Q. Can ZoGuard Plus be used on other pets?

No. ZoGuard Plus is only meant for treatment of dogs and cats.

Q. How do I apply ZoGuard Plus?

Remove the product tubes from the package and separate one tube from the others. Hold the vial with the notched tip up and away from the face. Use scissors to snip off the tip at the notches. Invert the vial and use the open tip of the tube to part your dog’s hair between the shoulder blades. Next, squeeze the tube to apply all of the product to your dog’s skin in a single spot between the shoulder blades.

Q:  Where do I apply ZoGuard Plus?

Apply all of the product to your dog’s skin in a single spot between the shoulder blades.

Q. How often should I apply ZoGuard Plus?

ZoGuard Plus should be applied monthly, or every 30 days. Do not reapply before the month is through. ZoGuard Plus works for a full 30 days.

Q. Will ZoGuard Plus work better if I apply it more often?

No. Do not reapply ZoGuard Plus before the month is through. It keeps working for a full 30 days.

Q. When does ZoGuard Plus start working?

ZoGuard Plus starts working as soon as it is applied.

Q. When can I bathe my dog after application?

Keep your dog from getting wet for 24 hours after application. ZoGuard Plus keeps working for 30 days, even if your dog is bathed or goes swimming. Be sure your dog is completely dry if you apply after a bath.

Q. How soon after application will ZoGuard Plus begin to kill fleas?

ZoGuard Plus will kill 100% of the fleas within 4-12hours after application.

Q. Now that I applied ZoGuard Plus, I am seeing even more fleas. Why?

As fleas die they will rise to the top of your dog’s coat. So it is normal to start seeing more fleas after treatment has been applied.

Q. I have treated my dog or cat with ZoGuard Plus but I still see fleas. Why?

If ZoGuard Plus was applied before the flea eggs have hatched, you may notice fleas on your pet again.  Consecutive monthly applications of ZoGuard Plus will work to eliminate those fleas. According to the Companion Animal Parasite Council (CAPC) year round usage of a flea and tick control product like ZoGuard Plus is recommended.

Q. How does ZoGuard Plus work?

ZoGuard Plus combines fipronil, the top-selling flea and tick control product, with (S)-methoprene, an insect growth regulator that keeps flea larvae from developing into adults. ZoGuard Plus contains the same flea- and tick-fighting protection as FRONTLINE Plus.

Q. What other insects does ZoGuard Plus kill?

Q What makes ZoGuard Plus different?

ZoGuard Plus is one of the only products available, besides FRONTLINE Plus, with the combination of fipronil and (S)-methoprene, making it an effective option for affordable flea and tick control.

Q.Where is ZoGuard Plus made?

ZoGuard Plus is manufactured and packaged in the United States. It is approved for use by the U.S. Environmental Protection Agency.

Have a question about this product?
Q
How long after I apply ZoGuard Plus For Dogs do I need to wait before I bathe my dog?
A

According to the manufacturer, Keep your dog from getting wet for 24 hours after application. ZoGuard Plus keeps working for 30 days, even if your dog is bathed or goes swimming. Be sure your dog is completely dry if you apply after a bath ZoGuard Plus For Dogs

16 of 18 people found this answer helpful

Q
How do I wait after bathing my dog should I wait before applying ZoGuard Plus For Dogs?
A

ZoGuard Plus For Dogs can be applied to your bathed dog once they have completely dried.

10 of 10 people found this answer helpful

Q
How soon will you see results from the fleas and scratching after using ZoGuard Plus for Dogs?

Are treatments useless if bedding not washed?

ZoGuard Plus starts working usually within a few hours, but the fleas do have to bite the treated animal to die from the application. You can use a flea dip or a product like Capstar if you need instant treatment for a lot of fleas that are already on the animal. We always recommend that you treat the environment where fleas are present in addition to treating products approved for the animals. We have a great Indoor Flea Control Kit here. Sheets and blankets can be washed and dried, and other items like pet beds that cannot be washed can be treated with the spray in the Indoor Flea Kit or steamed. Please take a few moments to review our Flea Treatment Guide here.

3 of 4 people found this answer helpful

Q
Do I still need to keep my three dogs separated for 24 hours after applying ZoGuard Plus for Dogs?
A

Yes, dogs treated with ZoGuard Plus for Dogs should be kept apart until the application has dried, which usually takes a few hours. If the animals were to play together before the product dries properly, then you could reduce efficacy or endanger the animals.

2 of 5 people found this answer helpful

Q
Do I need heart worm pills if I use ZoGuard Plus For Dogs?
A

ZoGuard Plus For Dogs will only control fleas, ticks, and chewing lice and is not labeled for heartworm, so if that is a concern, you will also need to use some form of heartworm control.