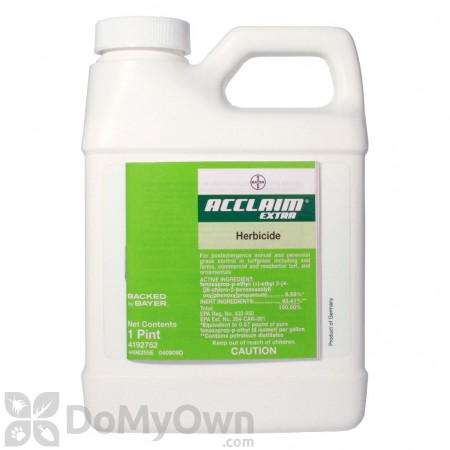 Acclaim Extra is a selective post-emergence herbicide that controls annual and perennial grasses in turf. A systematic herbicide that works in a single treatment, Acclaim is one of the only post-emergence herbicides that can control crabgrass and goosegrass effectively with good tolerance on desirable turf. And it does so in a wide range of growth stages – from spikes to 5-tillers.

Acclaim Extra Herbicide is absorbed through the foliage. Thorough coverage is important. Visual injury on the grass weed is evident approximately 4 to 10 days after application (dependent upon environmental conditions) but control of the grass weeds will take 12 to 21 days. Visible effects begin as a chlorosis (yellowing) and/or reddening of the leaf surface followed by death of the weed.

Acclaim Extra is absorbed primarily through foliage. It’s most effective during periods of active weed growth, and is rainfast about one hour after drying. Susceptible weeds stop growing, turn red or purple, then die within one week.

Have a question about this product?
Q
How much Acclaim Extra Selective herbicide do I need to use to make one gallon of finished solution?
A
According to page 4 of the Acclaim Extra Selective Herbicide product label "Hand-Held Sprayer Application for Spot Treatments: For hand-held pump-type sprayers, add 0.30 to 0.46 fluid ounce of Acclaim Extra Herbicide per gallon of water. Apply 0.30 fluid ounce per gallon of water when the grass weed is in the 1- to 4-leaf stage of growth. Apply 0.46 fluid ounce per gallon of water when the grass weed has 1 to 2 tillers. Spray target weeds thoroughly to the point of spray deposit runoff. Optimum results occur when spray coverage is thorough. The addition of a surfactant will improve coverage. A dye or colorant may be added to avoid spray pattern overlap." You can check out the product label and MSDS on our website by clicking on the link we provided above or by clicking on the links provided on the individual product pages.

Q
Can you seed following an Acclaim treatment?

when crab grass is dead can seed be put down and if so how long do u wait to seed?

A
According to the Acclaim product label: Fescues and ryegrass may be overseeded immediately following Acclaim Extra applications. All other turf species should be overseeded after a 21-day waiting period.

50 of 53 people found this answer helpful

I do not want to use glyphosate.

A
Acclaim Extra Herbicide is labeled for Japanese Stiltgrass and can be used in Kentucky Bluegrass and fescue lawns.

45 of 47 people found this answer helpful

Q
How can I kill Johnsongrass and crabgrass without harming my fescue?
A

Acclaim Extra Selective Herbicide  is a selective post-emergent herbicide that controls annual and perennial grasses in turf.  This includes Crabgrass as well as seedling Johnsongrass, and it will suppress rhizome Johnsongrass and is safe for use in tall Fescue.

41 of 42 people found this answer helpful

A
Acclaim Extra Selective Herbicide  can be applied when temps reach above 55 degrees.

25 of 26 people found this answer helpful