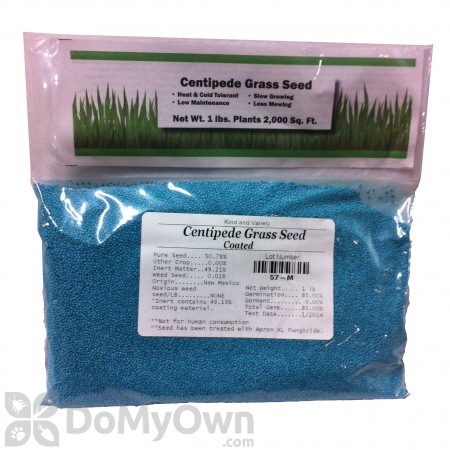 Centipede grass is a cool-season grass that is specially adapted to coastal plains region, which includes land from the southernmost tip of Texas and follows up the east coast of the United States, all the way to Manhattan Island in New York. Centipede grass works best for your lawn or grazing area when 4-5 pounds of seed is spread on an acre of lawn or grazing area. This grass seed will grow fastest during late spring and early fall, but will slow down during the summer season. So if you need a grass seed that will grow well during cooler parts of the year, Centipede grass is the grass seed for you.

This is a commodity item that may change manufacturers without notice.

Cultivated grass species are divided into two large groups: the cool season grasses and the warm-season or tropical grasses. On the west coast of the United States and in Canada, introduced northern grasses are cultivated, except on the west coast of California, where winter annual species are grown. A line drawn from east to west, and passing through North Carolina, Tennessee, and Arkansas, separates the areas in which cool- and warm-season perennial grasses are cultivated.

Have a question about this product?
Q
When is the best time to plant? What preparations need to done before planting and what care is required after
A
We recommend contacting your local Master Gardener here to find out the best time to plant the Coated Centipede Grass Seed. Your local Master Gardener is familair with the types of turf in your area and soil and weather conditions. You may also contact the manufacturer Curtis & Curtis directly at 575-762-4759