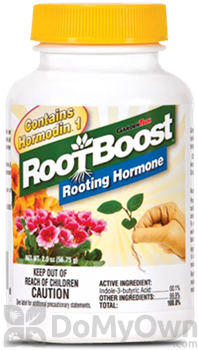 GardenTech RootBoost Rooting Hormone may be used on three types of cuttings.

Fertilizer can encourage top growth and may not be used for one week after treatment.

TYPE OF CUTTING TO USE

Cuttings of the current season's growth, 4 to 6 inches in length, generally are most satisfactory. Entire shoots of this length, cut at or near the base, should be taken, unless it is known that other parts root more readily. Some plants are readily propagated from leaf-bud cuttings. Propagators are familiar with the fact that tip cuttings of some varieties, and parts below the tip in other varieties, root best. This applies also, but to a lesser extent, to cuttings treated with GardenTech RootBoost Root Hormone. The basal cut may be made slanting or straight with small pruning shears, or with a knife. Large leafed types of cuttings will need to be trimmed, but it is preferable to use the largest leaf area which can be kept in god condition, and which at the same time meets the requirements for economy of space.

Throughout the United States, the time to take cuttings will be dependent on when new growth starts. Cuttings of the current season's growth, 4 to 6 inches in length, generally are the most satisfactory.

Note: Cuttings of certain plants can be taken over a much wider range of time in the south that in the North, and corresponding season advance must be considered.

In the State of New York, cuttings of most deciduous shrubs will root best when taken during June, July and August. A few varieties can be taken the latter part of April, and others during May, depending upon when new growth starts. Cuttings of the current season's groth, 4 to 6 inches in length, generally are the most satisfactory. Cuttings taken between August and December will vary considerably in their capacity to root. For plants grown indoors, cuttings should be taken according to the condition of the material, without regard to season.

Keep cutting material in a fresh condition from the start. Cuttings of many varieties keep fresh when the basal ends of the stems are immersed in water or wrapped in wet cloth or burlap until ready to place in GardenTech RootBoost Rooting Hormonee. Do not kep shoots and branches in closed containers for long periods. Frequent spraying of the cutting material, according to the dryness of the air, or covering with moist cheese cloth, will prevent excessive wilting.

PLANTING CUTTINGS AND HOW TO CARE FOR THEM

After treatment with GardenTech RootBoost Rooting Hormone, plant the cuttings in a mixture of 1/4 peat moss and 3/4 sand (by volume), or in sand only, until rooted. Propagators who have a satisfactory rooting medium should continue to use it. Any method of planting cuttings which keeps them in good condition may be used. When cuttings are planted in a vertical position, they require more critical care than when slanted in such a way that the exposed leaves lie flat or close to the surface of the rooting medium. Sufficient shade must be provided at all times, but particularly on hot, bright days, to keep the cuttings fresh, but not dense enough to cause rotting of leaves, or the growth of molds. Immediately after planting, the cuttings should be watered thoroughly and, thereafter, according to climactic conditions. The rooting medium below the surface must not be allowed to become dry.

A temperature in the bed of 70 to 75 F has proved satisfactory for many species. Temperatures below 60 F are not generally satisfactory with tested cuttings.

Have a question about this product?
Q
How do I use Garden Tech Root Boost Root Hormone Powder?
A

1.  The cut ends of the cuttings should be slightly moistened before treatment.

3.  Remove excess powder by tapping on rim of container.

6 of 6 people found this answer helpful

Q
can i use root boost on grapes and blackberrys and if not why not
A
We actually do not manufacture nor test these products. In this case the manufacturer has not tested this product on edible crops so these plants are not included on the product label. The EPA requires very rigorous and costly testing before a product can be used on edible plants so many manufacturers exclude these plants from the product label. Please let us know if we can be of further assistance.

3 of 6 people found this answer helpful

Q
Can Root Boost be added to water that I have some untreated cuttings in? If so how much??
A

Garden Tech Root Boost Root Hormone Powder would not be added to water for cuttings.

Per the product label:

1.  The cut ends of the cuttings should be slightly moistened before treatment.

3.  Remove excess powder by tapping on rim of container.

2 of 5 people found this answer helpful

Q
Can I use Garden Tech Root Boost Root Hormone Powder on seeds before planting?
A

No, per the manufacturer, Garden Tech Root Boost Root Hormone Powder would have no affect on the seeds.  It should be used on plant cuttings only.