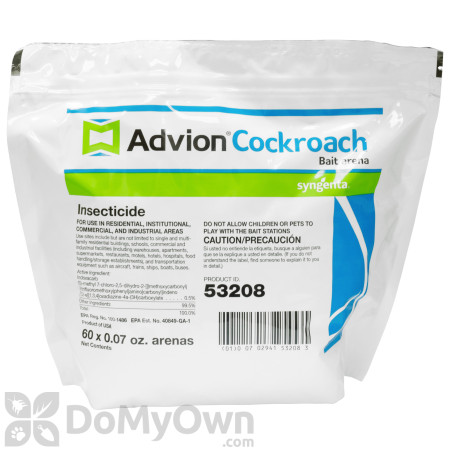 Advion Cockroach Bait Arena can be used to control roach populations indoors and outdoors with the active ingredient indoxacarb, an insecticide that acts through ingestion by cockroaches. Foraging roaches ingest the indoxacarb in the Roach Bait Arenas and spread the ingredient to other roaches where they hide. Each bag contains 60 stations. Adhesive backs are included so that the stations can be mounted on surfaces such as the corners and sidewalls of cabinets.

Advion Cockroach Bait Arenas contain bait material with the active ingredient indoxacarb, an insecticide that acts through ingestion. The activity of the insecticide allows adequate consumption of the bait by cockroaches prior to the onset of mortality. Indoxacarb inhibits the flow of sodium ions into nerve cells, resulting in impaired nerve function, inability to feed, paralysis, and eventually death. This process begins immediately but it may take several days for the insect to die. The active ingredient is then transferred throughout the colony through touching and indirectly through feeding on feces or poisoned carcasses.

Advion Cockroach Bait Arenas protect bait from contaminants and keep bait fresh for up to three months. Because the stations already contain bait, application is incredibly easy and convenient.

PESTS CONTROLLED: Cockroaches. Label does not exclude any species.

Use Advion Cockroach Bait Arenas indoors and outdoors adjacent to structures for roach infestations or in areas at risk of infestation. Though the labeling does not exclude any roach species, bait in arenas is generally more accepted by smaller roaches such as German and Brown-Banded roaches. Arenas are ready to use out of the bag, making them a great option when convenience is key and where bait needs to be protected from contaminants such as dust. Arenas can also be applied vertically with the included adhesive when discretion is needed, such as behind furniture in hotel rooms.

Arenas are convenient for use in areas like drawers and cabinets where bait could otherwise be at risk of contaminating utensils or food. Do not use residual sprays on top of arenas or in areas where arenas will be placed. Advion Cockroach Bait Arenas can be used as part of a bait rotation program to avoid resistance in roach populations.

Place arenas in or near cockroach harborage areas or areas known to be frequented by cockroaches. Exact placement of stations indoors should be based on a complete monitoring and inspection. Do not apply stations in areas where sprays have been used or will be applied. See our Indoor Roach Control Guide for images. Examples of room-by-room placements include:

Arenas should be placed adjacent to structures. Use in protected areas to minimize exposure to rain and other environmental factors. Focus on areas where roaches may enter the structure, such as near doorways, windowsills, and where utilities enter the structure.

Have a question about this product?
Q
Is there a need to “activate” the Advion Cockroach Bait arenas? Or do you just lay them down?
A

There is nothing to activate on the Advion Cockroach Bait Arena.  They are just placed in the areas where the targeted pest has been located.

Q
Does this work for Large Roaches? I have Palmetto Bugs and other Large Roach Type Bugs.
A
The Advion Roach Bait Arena made for smaller roaches such as the Brown-Banded or German roaches. When dealing with the larger roaches such as the Palmetto Bugs (aka American Roaches) it may be better to use a roach bait gel such as The Maxforce FC Magnum or the Advion Roach Bait Gel. You can apply the gel directly to cracks or crevices and you will not have to worry about whether or not the roach can fit into a station.

25 of 31 people found this answer helpful

We saw 1 roach scurry from behind the oven up the wall after cranking the oven way up to 500 to bake something. I had been smelling a weird musty smell that I associate with roaches for a month or two but had not seen any. We had the AC running so I thought if might be musty from not having windows open though. We never see anything scurrying if we flip the lights in the middle of the night. Have had the stations placed for a few days but have not seen any dead or dying roaches. What gives?

A
Just because you are not seeing dead roaches does not mean they are not dieing. They are not always going to die out in the open and often times will die in their nest. Are you seeing less roaches than you were before you put the stations down? Do you have enough stations down for the amount of infestation you have and is there still bait inside the stations you put down? Also, are you using any IGR's with your roach control regiment? If you are only using a bait, you could be killing off part of the colony just as quickly as they reproduce, so using a product like Gentrol IGR will sterilize the roaches so they cannot keep reproducing. Please look over our guide How To Get Rid of Roaches to make sure you are taking all the necessary chemical and non chemical steps to properly and completely eliminate the infestation.

21 of 23 people found this answer helpful

Q
How often I need to replace Advion Roach Bait Arenas in an apartment?

I placed Advion roach bait 3 months ago and I still see roaches, the baits are not depleted. Should I replace them?

We recommend that you use caulk or other suitable material to close any crack, crevice or gap around baseboards, pipes, wires, cables, cabinets, vents, door frames, window frames and any other place where insects could enter. This will help stop the roaches from moving from adjoining apartments through the walls and into your apartment

In addition, you should spray around the perimeter of each room with a good insecticide such as Demon WP and you should use an insect growth regulator (Gentrol) to control the breeding cycle of the roaches that have already entered your apartment.

18 of 19 people found this answer helpful

Q
Is Advion Roach Bait Arena a liquid or powder? How is it applied?
A

Advion Roach Bait Arena contains 60 bait stations that are pre-filled with roach bait gel.  You will place them in areas where cockroaches frequent such as along walls or corners, under or near kitchen appliances and industrial equipment, under sinks, in cabinets, and utility areas.  They are also used in areas like drawers and cabinets where bait could otherwise be at risk of contaminating utensils or food.

17 of 18 people found this answer helpful