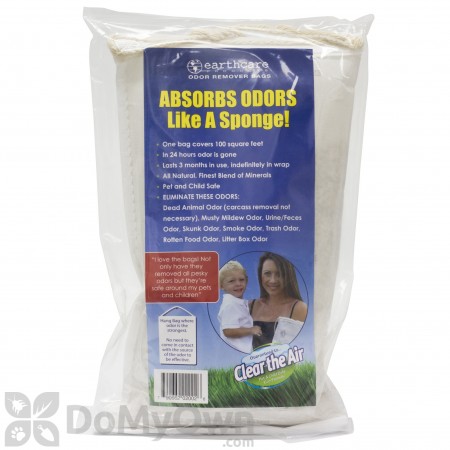 This innovative Odor Removing Bag by Earth Care removes odors like a sponge, using the properties of natural minerals-- no fragrances or cover-ups. Most odors can be removed entirely within 24 hours of use. The Odor Removing Bag is as easy to use as placing the bag near the source of the odor, and it will pull the odors from the entire room.  Each bag will last 3 to 4 months once opened.

One bag is recommended per room or every 100 square feet.

How to Use Earth Care Bag To Eliminate Dead Rodent/Animal Odors:

Place bag in each room that has an odor. If odor is coming from attic or basement, place additional bag in those areas as well.

How Does the Earth Care Odor Remover Bag work?

“Earth Care Products are negatively charged and odiferous gasses ride on positively charged particles. Because of this negative and positive attraction Earth Care draws in odors like a powerful magnet. The odors are adsorbed, neutralized, and encapsulated without any cover ups or fragrances. The molecular structure of Earth Care consists of billions of microscopic pores, which gives it a large surface area (exceeding the size of a football field). This enables Earth Care to adsorb phenomenal amounts of odors. Earth Care does not cover up odors it literally clears the air, leaving the air fresh and clean.”

To remove odor from dead animal carcasses and remaining urine/feces odors, take the following steps. Note: It is not necessary to remove dead carcass to remove the odor. More BAGs = faster better results.

BAG lasts an average of 3-4 months in use or indefinitely if kept in clear plastic wrap. Action to take for all odor problems:

Odors usually are adsorbed within 1-24 hours

BAG lasts an average of 3-4 months.

Have a question about this product?
Q
How big is the Earth Care Odor Remover Bag?
A
The Earthcare Odor Remover Bag is about 12 inches long and about 4 or 5 inches wide and about 3 inches thick. Unfortunately, we do not have any of the bags in our warehouse to measure. (We only get the bags as our customers order them so that we are sure we only have the freshest stock.)

8 of 8 people found this answer helpful

Q
Is there anything you can use to kill mice without the death odor?
A
No, unfortunately there is not.  There are myths and rumors about products that will kill rodents and not let them smell, but these are just that, myths or rumors.  Mice will sometimes die in the house and sometimes they will not.  It is just the luck of the draw.  However, if they do die in the house we do have many products that will help with the odor.  Our Earth Care Odor Remover Bags is our best seller for odor elimination.

I got some new gym equipment that has a terrible odor coming from the plastic and rubbber parts, will this bag help in getting rid of the odor?

Earth Care Odor Remover Bag could potentially remove odors from gym equipment, but he have a better recommendation. DSV  is an all-in-one solution with a powerful disinfectant that is highly effective against disease-causing bacteria. But it's also a sanitizer that can rid an area of germs and fungi that can cause sickness and mold. And it's a powerful virucide, capable of killing the viruses you've read about in todays headlines, as well as many others that you may not even be aware are stalking your home. This will take away what is causing the odor.

2 of 3 people found this answer helpful

Q
I had racoons living in my attic for a while. I removed them and replaced insulation, but there is still smell

The smell is urine and the smells from the animal. How do I remove it for good?

We have different odor eliminator products that would work for your situation. One of them is the Earth Care Odor Remover Bag. Basically, you would open up the bag, and it would eliminate the odor within 24 hours. Each bag lasts for about 3-4 months once opened. We recommend one bag per room.

Another option that you have is called Bac-A-Zap Odor Eliminator. You will apply this at one quart per 100 square feet.

2 of 3 people found this answer helpful

Q
Used a ant kill and there is a horrible smell, we ordered 2 bags, and it has been 3 days and still stinks?

So I don't know what else to do

A
If you are using the Earth Care Odor Remover Bag as labeled and the odor is still there, you made need to contact the manufacturer of the ant kill product. Please let us know if you have any more questions.