Both adult Japanese beetles and their larvae (known as grubs) can greatly damage gardens and yards if they are not treated. An infestation can grow very quickly, requiring the use of insecticide sprays, granules, powders, and traps. DoMyOwn has the products needed to control an infestation and prevent new beetles from invading your lawn.

Free Shipping!
A professional insecticide that controls grubs for commercial and residential lawns and golf courses, including tees and greens.

For foliar and systemic control of insects in ornamental plants and vegetable transplants in greenhouses, nurseries, interior plantscapes, outdoor landscape, and forestries.

A professional insecticide for livestock use indoors and outdoors that provides quick kill and residual protection for up to 28 days.

Free Shipping!
A professional water soluble systemic insecticide in 4 packets that control insects for lawns and ornamental shrubs and trees.

A professional water soluble insecticide that controls insects for turf-grass and ornamental plants in greenhouses and nurseries.

A professional insecticide for commercial and residential lawns, gardens and ornamental plants and trees.

Free Shipping!
A professional systemic insecticide and fertilizer to control insects and health for landscape and container trees and shrubs in a tablet form.

A professional insecticide termiticide for commercial and residential applications in and around homes, lawns, shrubs, interior plantscapes and parks.

Lawn & Garden Dispenser is a quick, hassel-free way to apply Milky Spore Powder and other dusts.

A professional insecticide and the same as Sector Misting Concentrate, for fogging machines, mosquito automatic misting systems, indoor and animals.

A professionally formulated broad-spectrum insecticide that controls and destroys listed pests indoors and outdoors.
Previous 1
2 of 4
3 4 Next View All

Here are a few common Q & A Japanese beetle facts to help you understand how to control these pests better.

Q: What are Japanese beetles?
A: Japanese beetles are scarab beetles, a family of beetles that tends to appear in early June and last a couple months. All can be called “June bugs,” but each species is different and causes different degrees of damage. Japanese beetles are the adult form of the white grub. Japanese beetles have a distinct metallic green body and head and copper colored wings. All other beetles in this species, like the Asiatic garden beetle, are various brown shades except for the green June beetle, which is mostly a bright green. 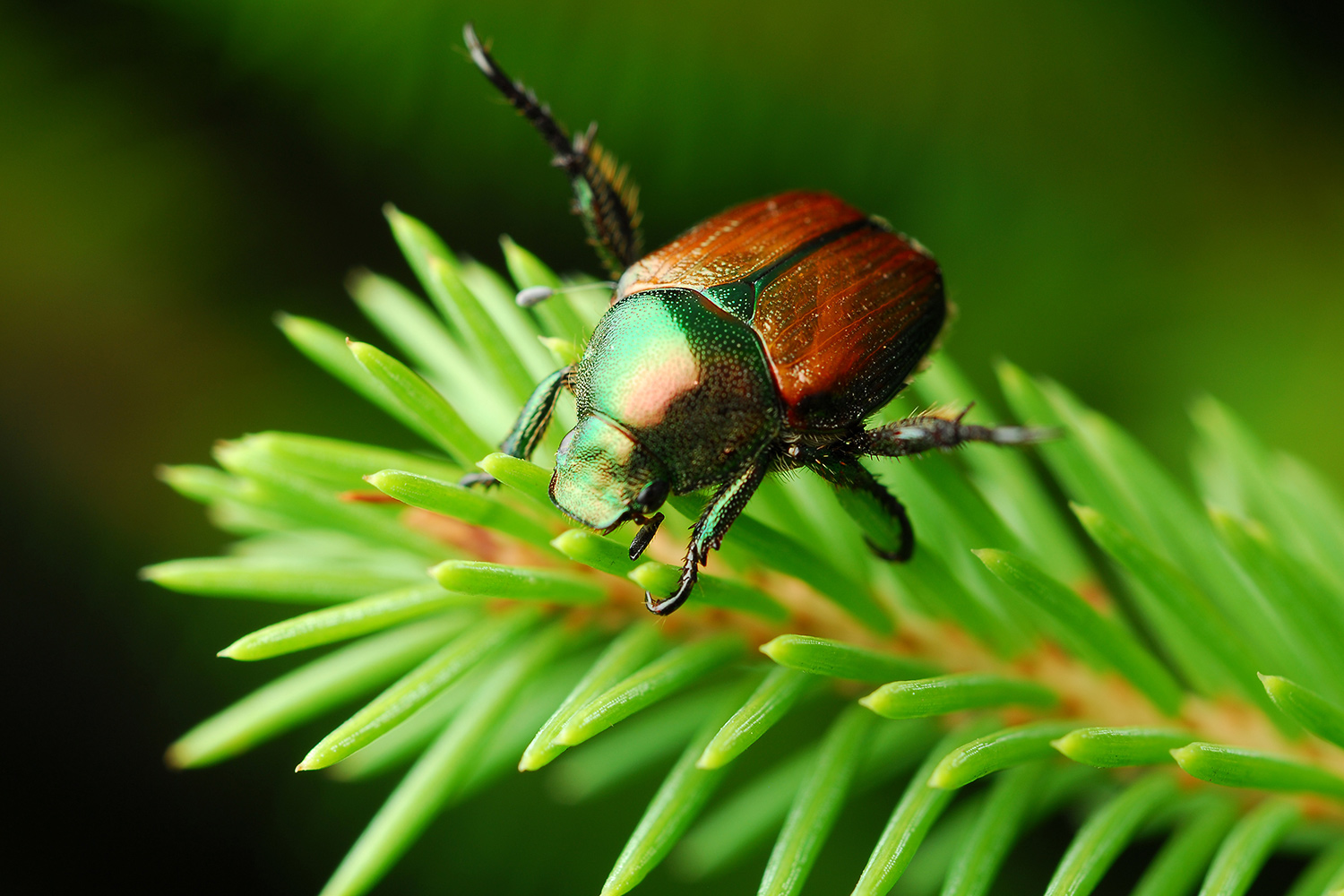 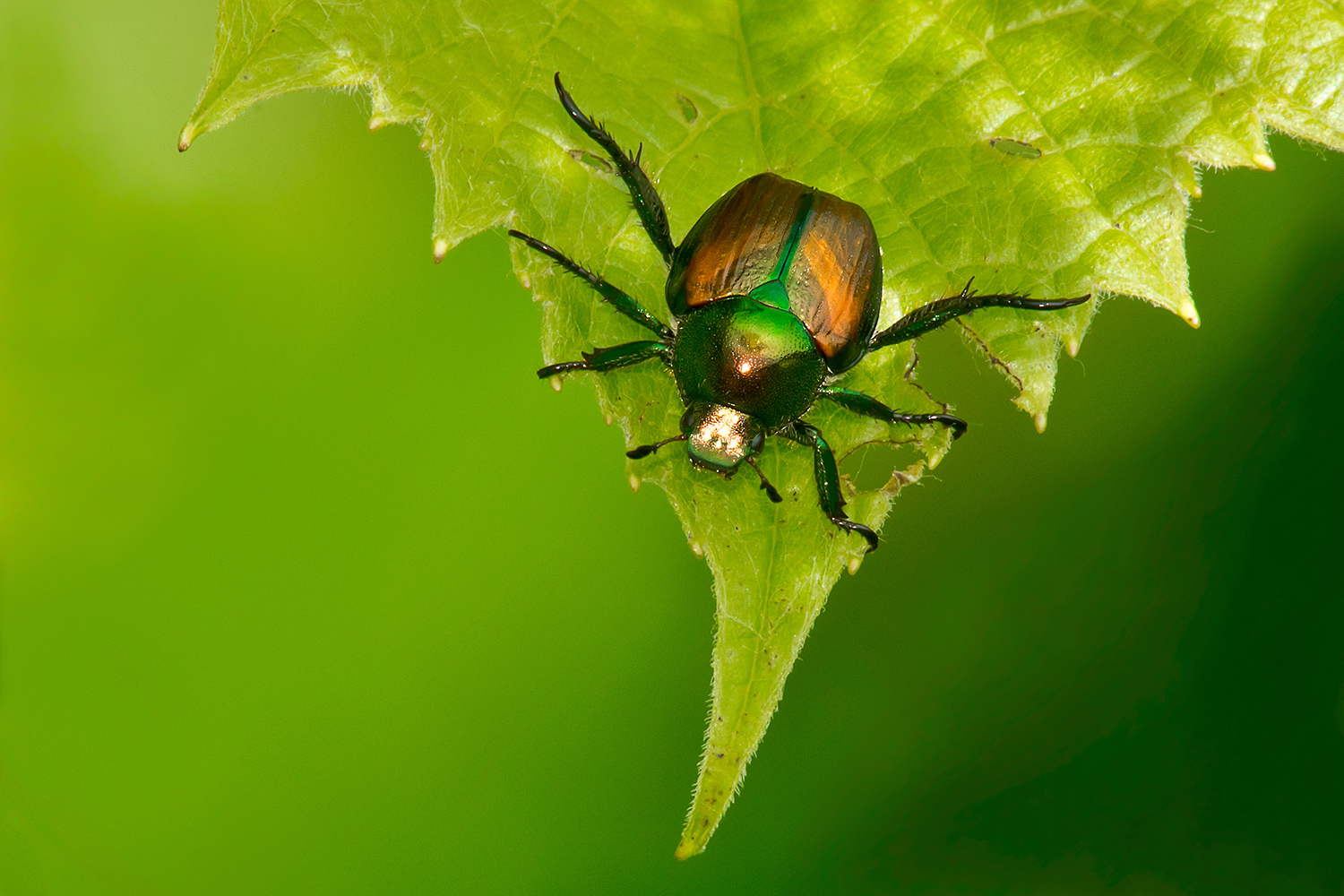 Q: What is the Japanese beetle life cycle?
A: Adult females lay eggs in the soil around July. The white, C-shaped grubs emerge from the eggs and feed on roots of grass throughout the summer. The grubs overwinter deeper underground and begin to move up to the roots again when the soil temperature rises to about 50 degrees until they pupate and emerge in early June as adults. Adult beetles live for about 30-45 days.

Q: What do Japanese beetles eat?
A: They begin feeding on low-lying plants before moving up to shrubs, trees, and crops. Plants most likely to be eaten by the beetles are roses, Japanese and Norway maple, horse chestnut, hollyhock, gray birch, American chestnut, Rose-of-Sharon, apple, cherry, plum, peach, mountain ash, American and English elm, and grapes.

Q: What does Japanese beetle damage look like?
A: They can devour leaves, flowers, and overripe or damaged fruits. The damage appears as lacy leaves for adult beetle damage and yellowed patches of lawn for grub damage. 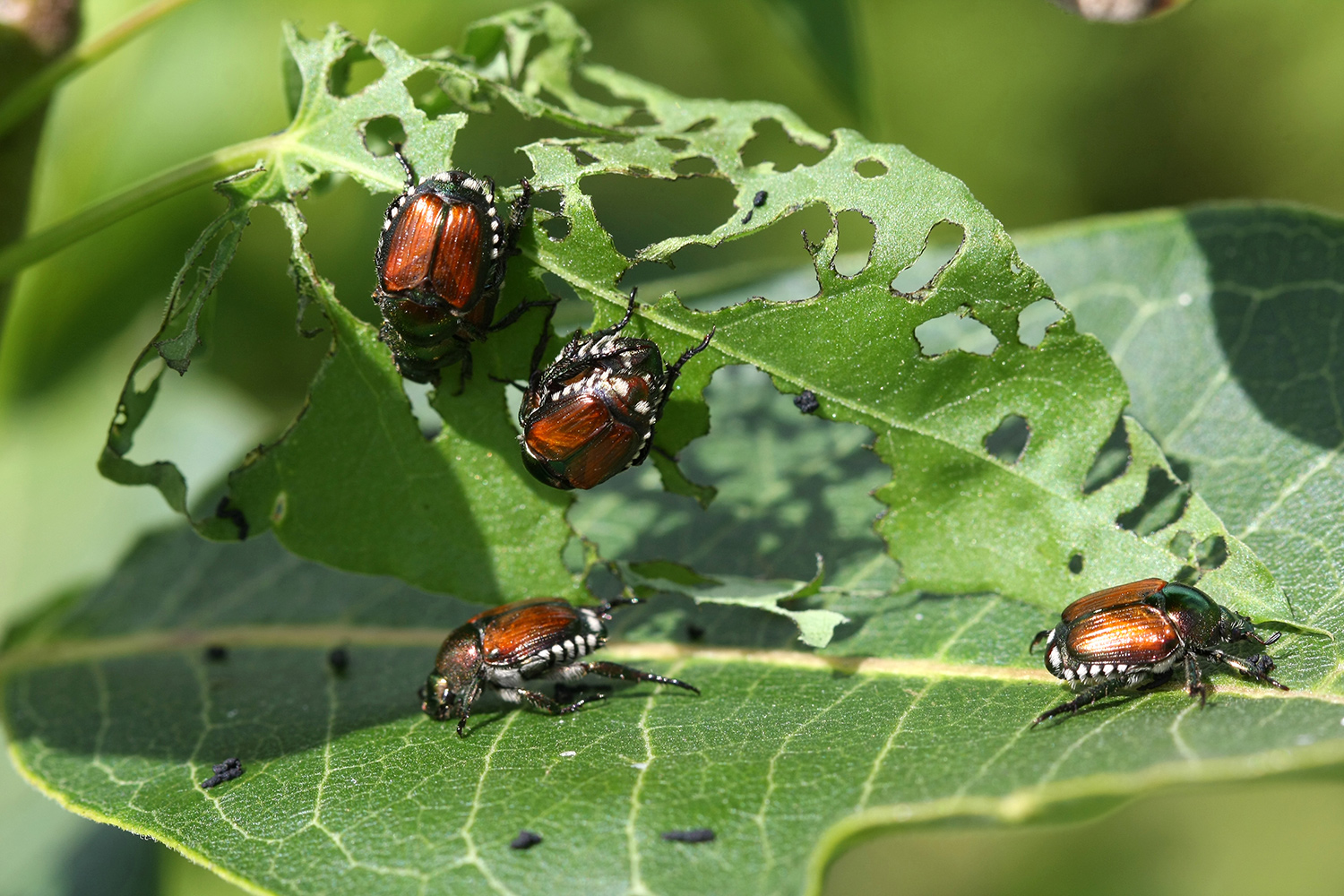 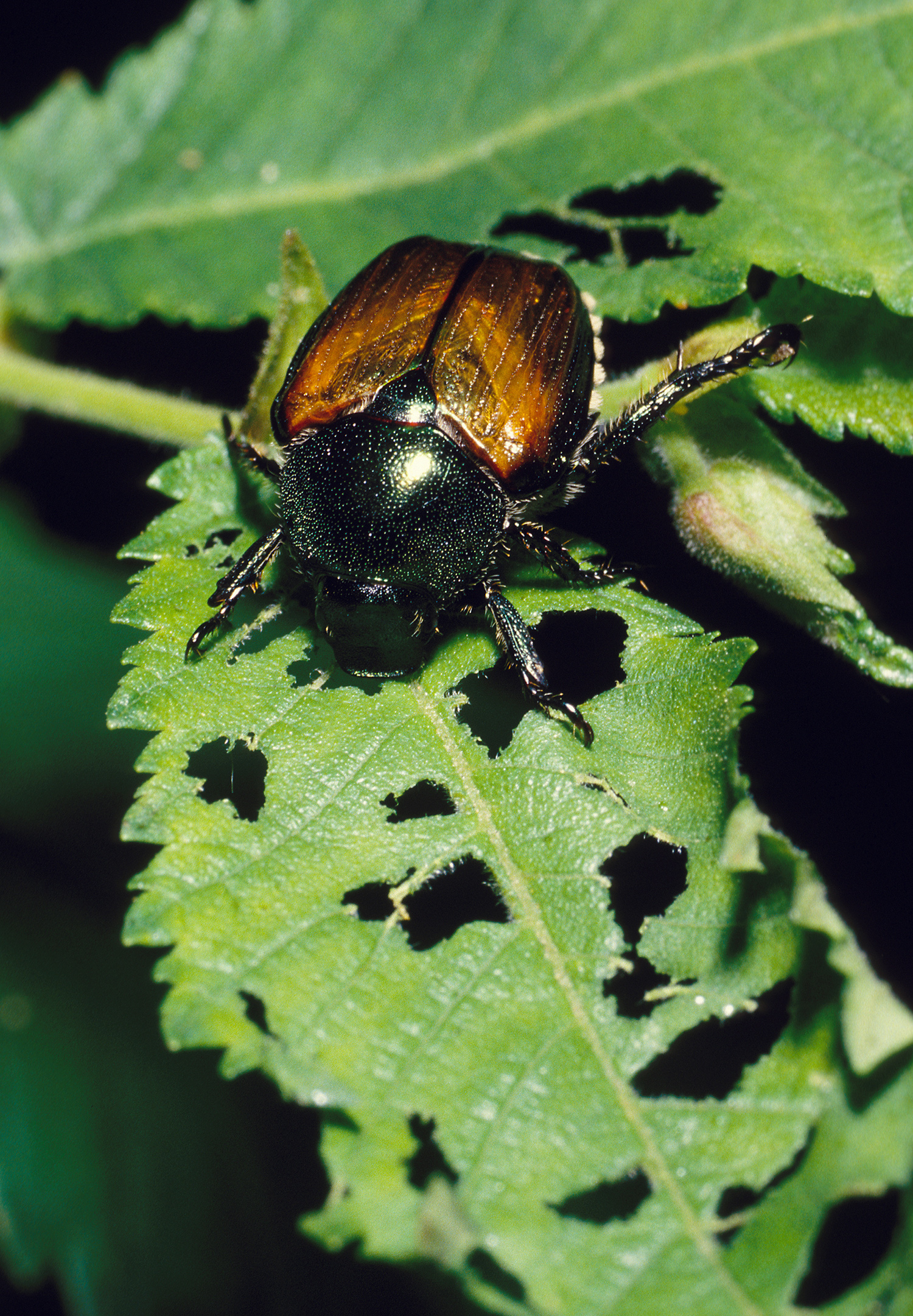 How to Get Rid of Japanese Beetles

There are several treatments you can implement for killing Japanese beetles, lessening possible damage, and keeping them away. We recommend using a pyrethroid insecticide or repellant such as Talstar P or a natural insecticide like Essentria IC3 to control adult Japanese beetles. Spraying susceptible plants every 3-4 weeks while beetles are active with the highest allowable rate on the label is important. If your Japanese beetle population is very large, we recommend treating your lawn to kill the eggs and grubs and prevent adult infestations in the warmer months. Treating your lawn with Merit Granules early or milky spore powder later in the season will eliminate many of the grubs. Timing this type of treatment is key and you should contact your local cooperative extension to find out the best time to treat grubs in your area.

If your population isn’t very high, hand pick beetles off your plants and put them in a bucket of soapy water. Wrapping prized plants like roses in cheesecloth or fine mesh will protect them from large feeding populations. When landscaping a known Japanese beetle area, try to pick plants that Japanese beetles aren’t fond of, such as red and silver maple, boxwood, flowering dogwood, holly, white and green ash, magnolia, red mulberry, white poplar, common lilac, and most ornamental evergreen plants.

Japanese beetle traps can be effective tools for getting rid of these pests. It is recommended to kill these insects while they are still in the larvae stage (white grubs), but if they are already grown and infesting your property, using traps in conjunction with the sprays mentioned above can work really well.