A rat elimination program usually consists of sanitation and rat removal. Sanitation will help eliminate the food and water sources rats are using to survive, which also helps in the prevention process. Rat removal methods will vary depending on the personal preferences of the structure owner and their individual level of infestation.
Step 1

Get Rid of What Rats Need to Survive

Sanitation is the single most important measure of control in getting rid of a rat problem. Rats must have access to a ready supply of food and water to thrive and harborage to nest. To reduce rat populations, try the following sanitation measures:
Step 2

How to Get Rid of Rats In Your House

After you have followed the sanitation measures outlined above you can start the rat removal process. There are several methods available for both indoor and outdoor rat control and you should choose the method(s) that best fits your needs and preferences.

Trapping is the preferred method of indoor control. There are several advantages to using traps for rat removal indoors. Trapping does not require the use of rat poisons indoors. Trapping does allow you to know if a rat has been trapped so that you can can be sure your efforts are working. And last, trapping allows you to remove the carcass to avoid bad odors and secondary insect infestations from decaying carcasses.

A snap rat trap is a wooden, metal, or plastic trap with a powerful snap hinge intended to kill rodents quickly. Snap traps are typically used with some form of bait to lure the rodent to the trap.

Snap traps should be placed in areas where you noticed activity during your inspection. To maximize the chances of rodents passing over traps during their travels, traps should be placed perpendicular to the wall with the trigger end almost touching the wall. Alternatively, you can place a pair of traps end to end,parallel to the wall, with the triggers positioned to intercept rodents traveling from either direction.

The right bait will lure rodents to the snap trap, especially when most other food sources have been eliminated through proper sanitation.

Ideal baits for rodents are those that give off an aroma, such as bacon, canned tuna, nuts, or peanut butter.

When using solid baits, tie the bait to the trigger. This will prevent rodents from being able to remove unsecured bait without setting off the trap.

Where other food sources are abundant and cannot be eliminated, soft nesting material such as dental floss, cotton, or Styrofoam tied to the trigger may do the trick.

A rat glue trap is a flat piece of cardboard or a shallow plastic tray that is covered in a specially designed adhesive that can be placed flush against floors and walls where rodents travel. When rats travel over the glue trap, they become "stuck" and will eventually die. Some traps come pre-scented to help lure the rodents to walk over the trap. In most cases, simply placing the trap flush against the wall in areas where rats have been active is all that is needed.

Live catch rat traps (also known as humane traps) look like small wire cages. On one end is a door that you prop open. Once the rat goes into the trap, they will stand on a pedal to eat the bait that has been placed inside. Once the pedal has been tripped the door will slam closed and the rat will be humanely trapped. You can bait the trap with the same types of bait used in snap traps. Live catch traps are a great way to remove rats from your structure without harming the rodent. You will need to check with your local authorities to see what the ordinances are on catching and releasing rats in your region. Live catch trapping is not effective if you have a large infestation or if you are trying to trap small juvenile rats.

While you can use rat bait poison indoors, we strongly urge you not to do so. After a rat consumes a lethal dose of the bait it is possible that the animal can get into an area that is inaccessible making removing the carcass impossible. This can lead to a terrible odor and a secondary insect infestation. If you choose to bait inside, please place rat bait inside tamper resistant bait stations and place the stations out of reach of non-target animals and children. You should remove rat carcasses as soon as they are located.

There is no such product that will cause rodents to go outside of a building, go outside to seek water (they already have water inside!) or dry up so they do not have an odor when they die. These myths were likely introduced by unscrupulous salesmen to get homeowners to allow the baits to be used inside their homes.

In areas where rats have been nesting in attics or basements and they are using exposed beams to travel, you can secure Trapper T Rex traps to the beam with a zip tie. In some cases, you may run into a rodent that seems to avoid your traps at all costs, perhaps because of narrowly escaping a trap in a previous encounter. This will require more clever strategy. One method is to camouflage the trap by first burying an unset trap in grain, straw, or sawdust in a shallow pie pan. Baits should be placed in 3 to 4 small pieces on top of the pan with the trap hidden. Once the rodent accepts these baits without issues for several nights, the same bait can be used on the set trap

How to Get Rid of Rats Outside & In the Yard

Controlling the rat population outdoors is usually done by using rat bait poison enclosed in tamper resistant rat bait stations. As the rats forage for food and look for new harborage they enter the stations and consume the bait. Products and tools needed: It is recommended that you use 4-6 bait stations around the structure. Place one station at each corner of the structure and if needed, one by the front entrance and one near the rear entrance.

Load the rat bait blocks into the stations as directed on the product label. Check the stations once every 1 - 2 weeks and replenish the bait as needed. As long as the bait is being consumed, it is working to kill rats. Most people underestimate the rat population on their property and assume the bait is not actually killing the rats. In fact there are usually just far more rats than they guessed so more bait is being consumed. Be patient. Baits can take up to 5-10 days to kill rats after they have eaten a lethal dose of bait. It is normal not to see dead rats. When rats start feeling the effects of the bait they can return to the nesting area which is typically hidden and that is where they will succumb to the bait.

If you have a roof rat infestation outdoors and you see rats crossing fences or in trees, there is a special rodent bait station called the JT Eaton Top Loader that can be anchored to the fence or tree branch to encourage the rodents to eat the bait. 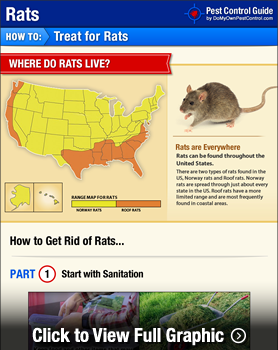 301 of 311 people found this article informative and helpful.