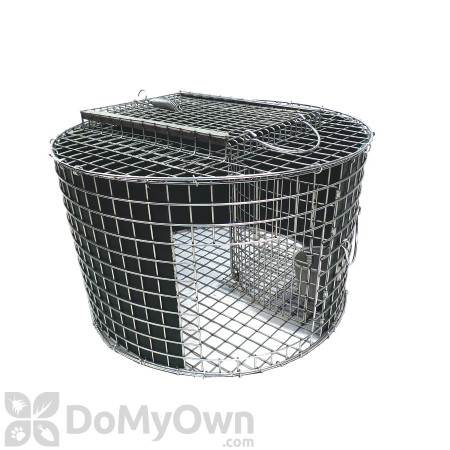 The Tomahawk Humane Roundhouse Trap is a specially designed trap for feral cats. It can also be used for other animals of similar size.  It is a one-of-a-kind humane circular trap that eliminates straight walls and corners for the trapped animal to push against. Emphasizes security and portability. Its internal plastic cover protects trapped animals from elements and keeps them calm. Its easy door release allows quick baiting, release, or transfer. Its side handle lets you carry it easily. Comes with a removable bait dish.

*Please note, animals weighing under 8 oz may not be heavy enough to set off the trigger plate.

1. Place the trap in trapping position by setting it on the ground with release door facing up. Unhook the spring clip from the release door, and slide door open to gain access to the inside of the trap.

2. Make sure food/water cup is attached to the trap before proceeding to step 3. It may have been dislodged during shipping. If so, put cup back by placing into the green plastic cut-out, and slide cup grooves over the trap wire from left to right until it’s firmly attached.

3. Locate the trap door which is on the side of the trap. Push the trap door open and into the trap pushing on or near the sheet metal portion of the door to dislodge it from the magnet. Swing the door in just past the trigger panel.

6. Replace the release door and use the spring clip to latch it. 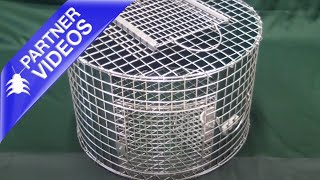